Like its cousin Byssocorticium atrovirens, B. pulchrum is a beautiful blue crust found under wood and leaves in the forest. Indeed, its Latin name "pulchrum" translates to "beauty". To differentiate the two you will need to look at their spores under the microscope. B. pulchrum has slightly larger spores (5–6 µm in diameter) compared to B. atrovirens (3–4 µm). This small morphological difference corresponds well to molecular phylogenetic groupings.

Byssocorticium in general is poorly represented in sequence databases. Just three other vouchered specimens identified as B. pulchrum have been sequenced and all of them are from northern Europe. The ITS region is only about 93-95% identical between this New Jersey specimen and two Swedish specimens. Examining the ITS tree below, B. pulchrum from the Americas may constitute a distinct species from European and Asian B. pulchrum. This parallels B. atrovirens, which also shows high ITS divergence across geographic regions. However, in both cases the species complexes appear to have a consistent morphology. At the end of the day splitting these taxa or keeping them lumped might just be an arbitraty decision, although more sequences could help clear things up.

Ecology: Mycorrhizal, growing on the underside of wood debris.

Basidioma: Effused, byssoid to athelioid, with an even to weakly merulioid hymenophore and an indeterminate, arachnoid margin; bright, light chalky blue when fresh, fading slightly when dried. 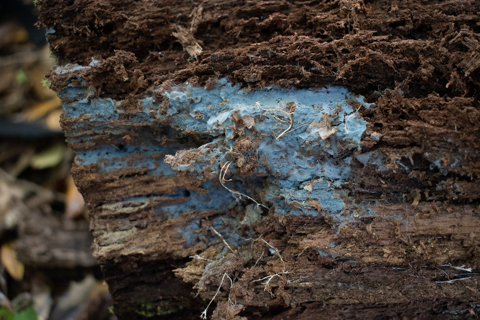 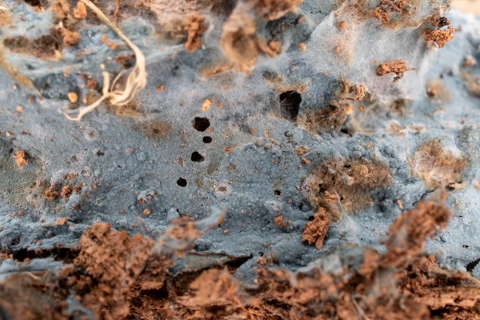 The hymenophore is loosely attached to the substrate as a delicate, membranaceous sheath that can be removed like Athelia, although it tears easily. 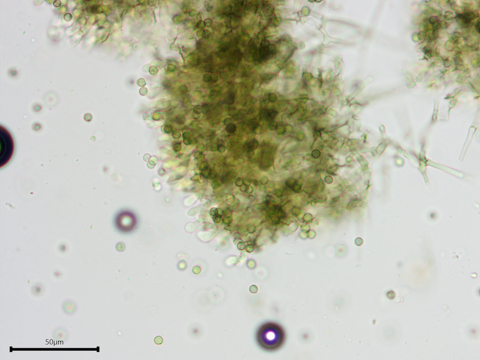 The hyphae and spores are greenish in Melzer's reagent. 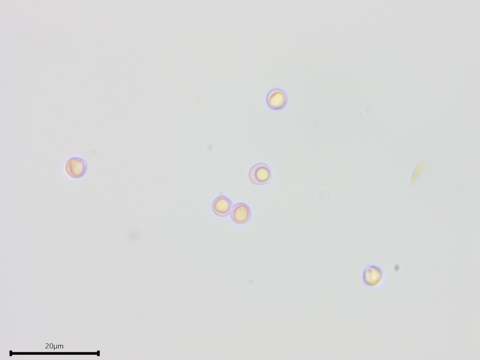 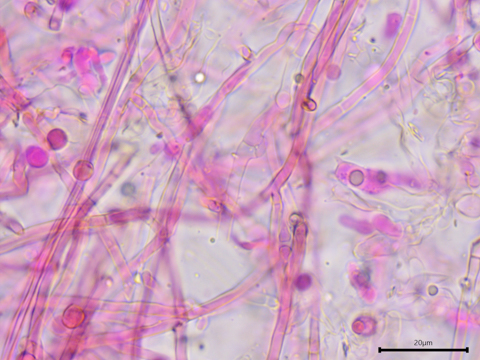 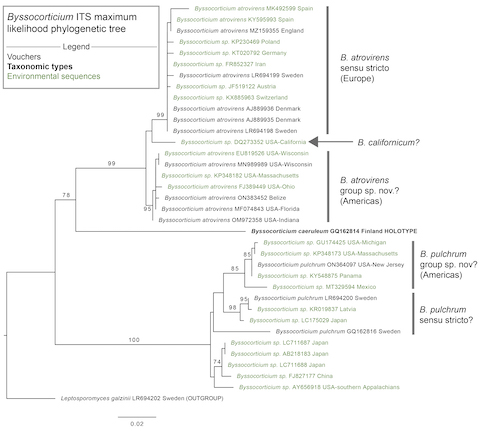 Byssocorticium ITS maximum likelihood phylogenetic tree. The sequences were aligned in SeaView with MUSCLE, trimmed with TrimAl, and analyzed with RAxML using 1000 bootsrap replicates and the GTR+G model. Sequences are annotated with their GenBank accession number and location of origin. Bootstrap values ≥ 70% are considered significant. Leptosporomyces galzinii serves as the outgroup.