Blue is the rarest color in nature. So, why is this crust, hidden under branches and leaf debris, such a brilliant blue? In other words, what is the adaptive function of such a unique color in Byssocorticium atrovirens? All eight recognized species of Byssocorticium appear to be blue (Index Fungorum, accessed December 3, 2020), so whatever the explanation is, the coloration has been preserved throughout the evolution of the genus over a relatively long period of time.

The genus Byssocorticium is a member of the recently reerected family Byssocorticiaceae (along with Athelopsis and Leptosporomyces) in the poorly understood but ecologically dynamic order called Atheliales, which consists entirely of crust fungi (Rosenthal et al. 2017, Sulistyo et al. 2020). The genus name derives from the byssoid, or cotton-like, texture of the basidiocarp. Telltale signs that you have a Byssocorticium species include the blue coloration, the byssoid texture, as well hyphae that branch at right angles. Byssocorticium atrovirens may be very widespread, but more likely most blue specimens are labelled as Byssocorticium atrovirens when they actually constitute many different species, perhaps cryptic species. This specimen, for example, unexpectedly has finger-like hyphidia and cyanophilic spores, characteristics reported for Tretomyces lutescens — a yellow species that was once placed in the genus Byssocorticium but is now in the Atheliales family Pilodermataceae (Kotiranta et al. 2011, Sulistyo et al. 2020).

Even though Byssocorticium atrovirens grows on the bottom of plant debris, it actually forms ectomcyrrhizae (Tedersoo et al. 2010) and may play an important role in the functioning of forest ecosystems (Rosenthal et al. 2017).

Ecology: The documented specimen was growing on the underside of deciduous leaf debris.

Notes: All measurements were taken using a smash mount of dried tissue in 5% KOH stained with phloxine. 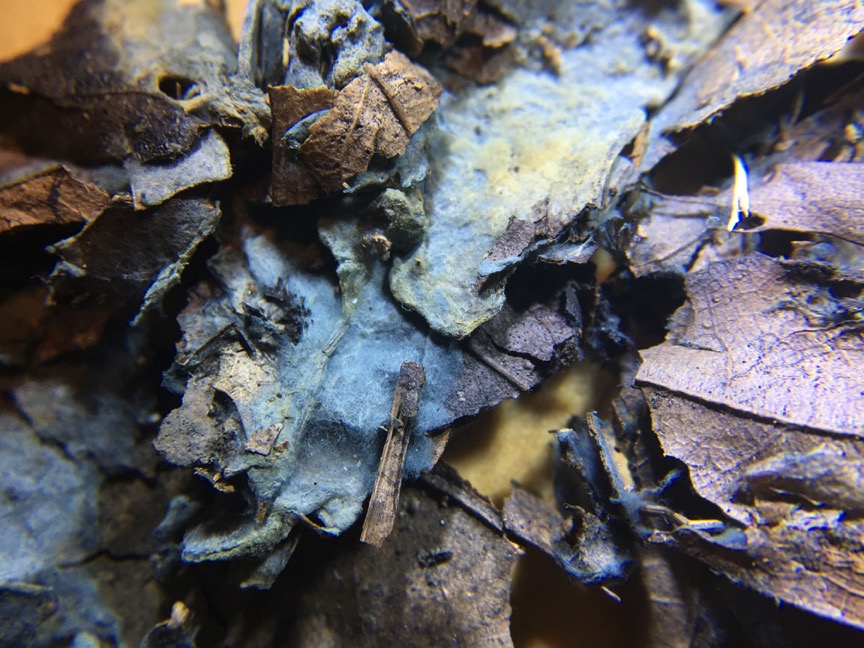 So byssoid and blue! This species also acquires yellow patches, perhaps as it ages. 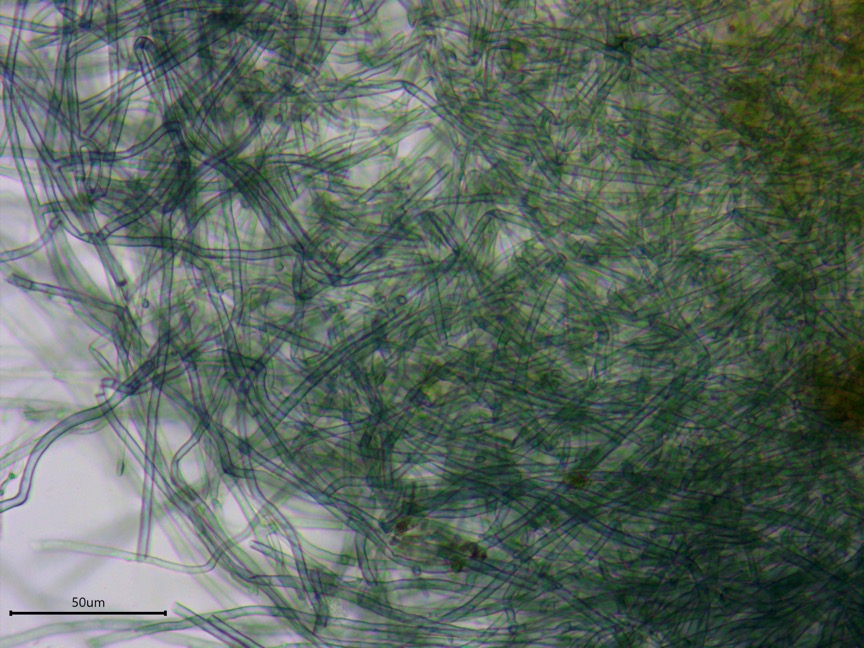 The color of Byssocorticium atrovirens derives from the blue-green hyphae. 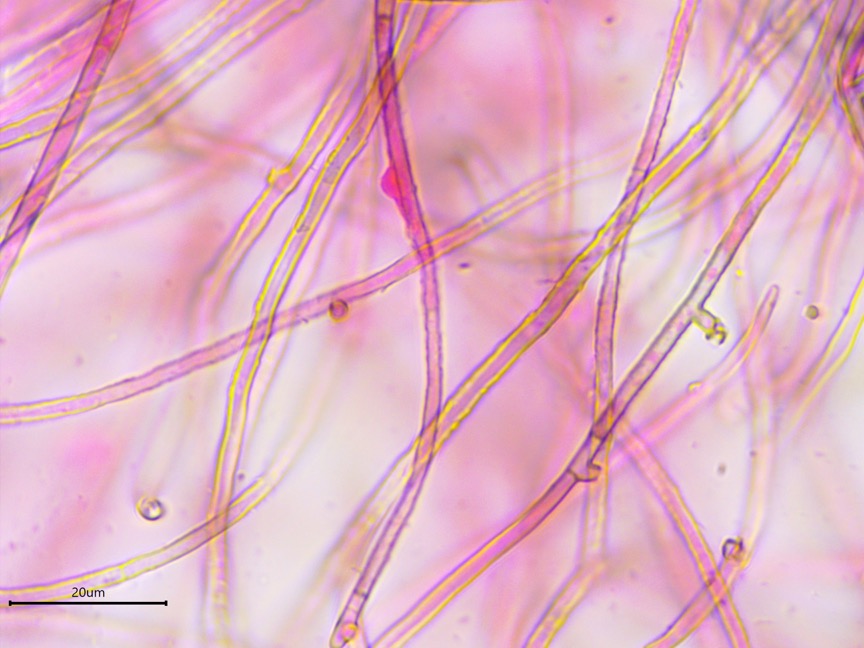 The hyphae are long and branching at right angles with a rough, course texture. In this photo, a glob of gunk can be seen on a hypha in the center. 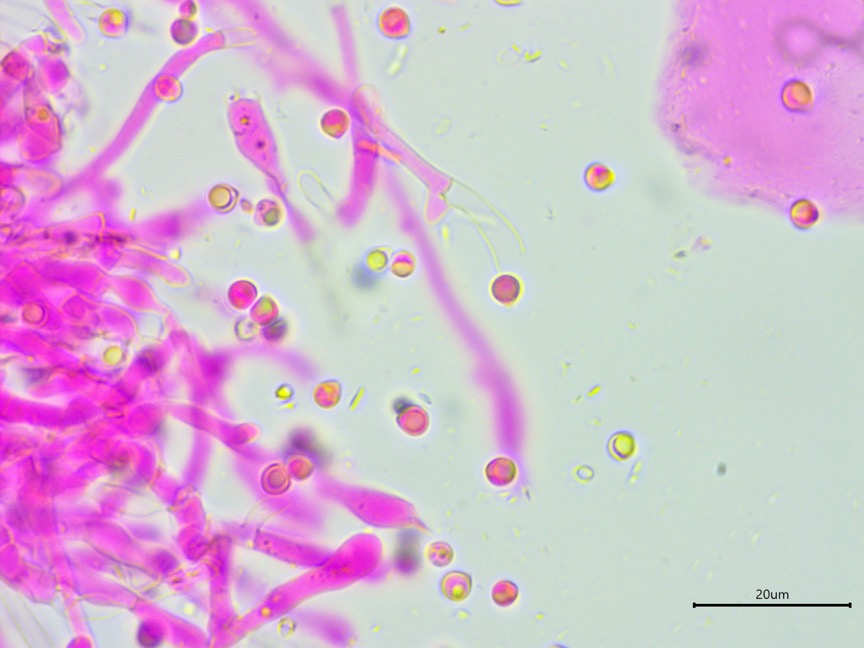 The spores are small and subglobose with a pointy apiculus that gives them the appearance of a pear. Note the large oil droplet (guttule) in most spores. 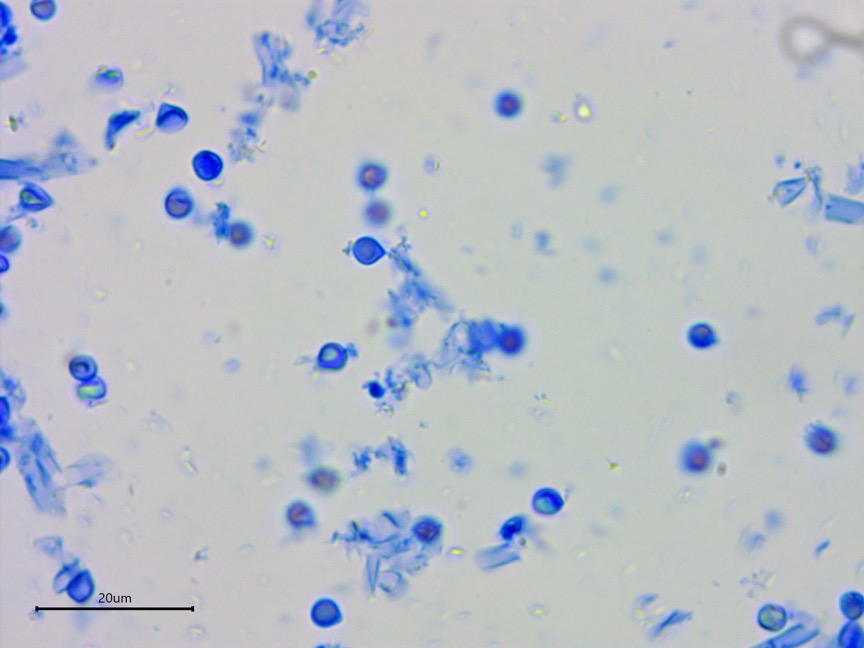 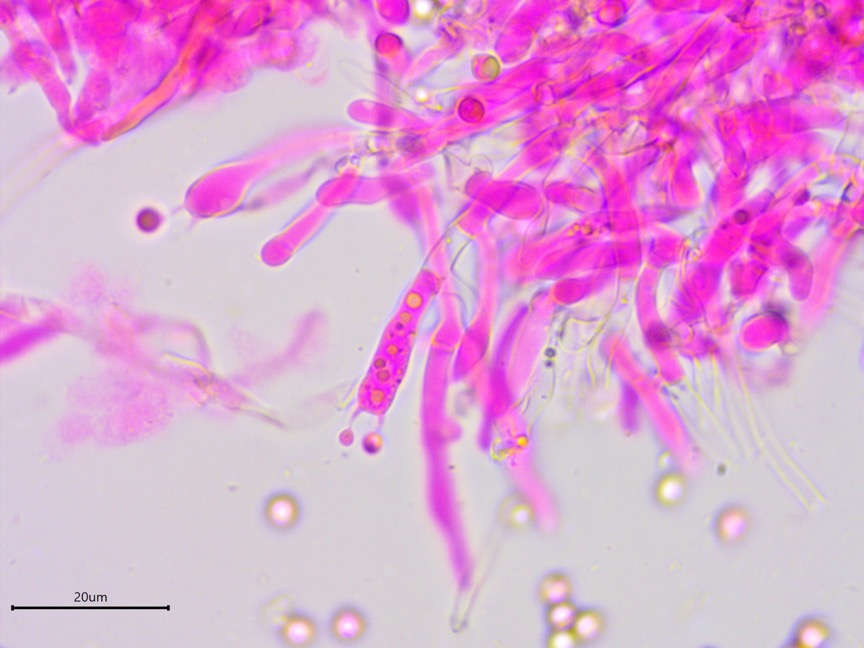 The basidia have four sterigmata (although these appear to have two) and are often filled with guttules. 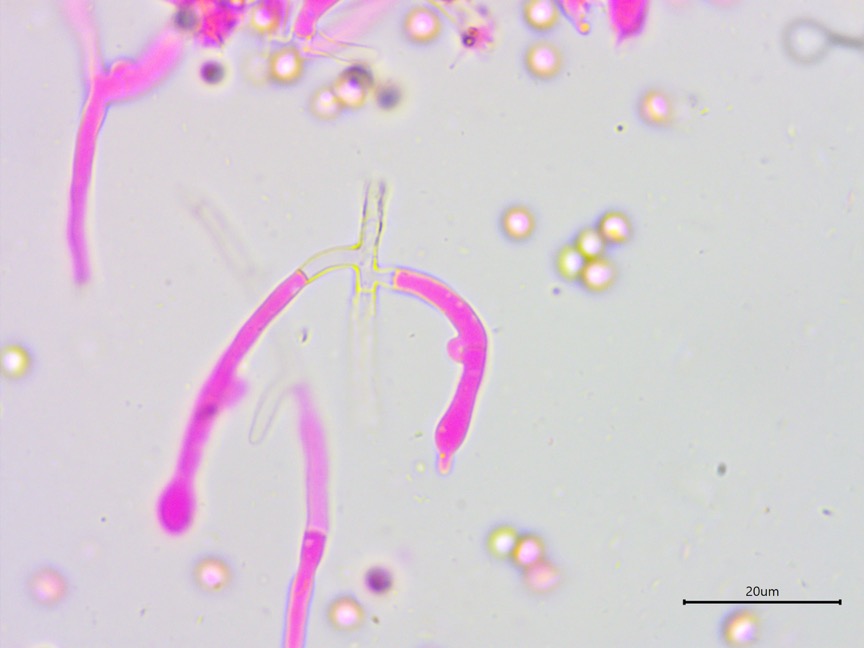 This is the beginning of a finger-like hyphidia. While the subicular hyphae completely lack clamps, the subhymenial hyphae have occasional clamps, distinguishing this species from Byssocorticium efibulatum. 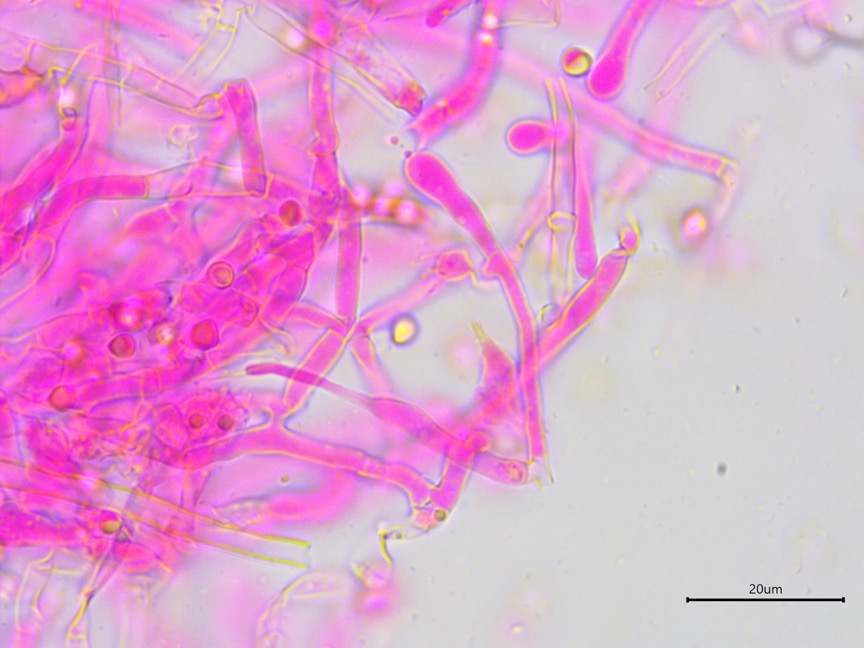 Another look at the distinct finger-like a hyphidia, a characteristic also reported for a different genus in the family, Tretomyces. 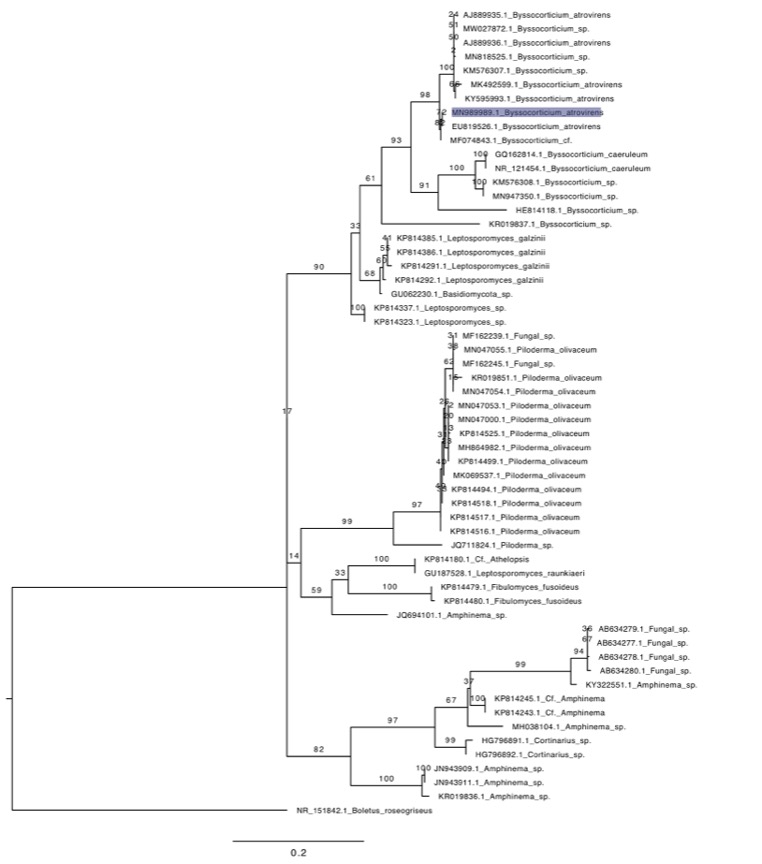 Phylogenetic tree of ITS rDNA sequences from the studied specimen (highlighted) and selected vouchered specimens on GenBank. The sequences were processed with ITSx to remove the flanking SSU and LSU partial sequences, aligned in SeaView with MUSCLE, and made into a tree with RAxML using 100 bootsrap replicates and the GTRGAMMA substitution model. Boletus roseogriseus (type sequence) serves as the outgroup.