Xenasmatella species were previously classified in Phlebiella, a genus created by Petter Adolf Karsten in 1890 and typified by the distinct crust fungus Xenasmatella vaga. Decades later it was recognized that Phlebiella was "invalidly published" according to the rules of fungal taxonomy, prompting mycologists to move species in Phlebiella to Xenasmatella, the first "validly published" genus available (Liu and Yuan 2022). There are 25 known Xenasmatella species, a number of which have been described in recent years from southern China (Liu and Yuan 2022, Luo and Zhao 2022, Zong et al. 2021, Zong and Zhao 2021). These taxonomic efforts have even resulted in the recognition of a new fungal order, Xenasmatales, to accompany the diverse and understudied Xenasmataceae family, which currently houses Xenasma (e.g., X. praeteritum), Xenasmatella, and Xenosperma. Molecular phylogenetic support for this new order, however, is flimsy. Luo and Zhao (2022) inferred an order-level phylogenetic tree with just LSU sequences, which supported a monophyletic Xenasmataceae but provided no support for its relationship to other orders.

I am treating the specimen studied here as an undescribed species and providing it the provisional name Xenasmatella sp. 'sublividus' for the greyish blue color of the basidioma. Unlike many other Xenasmatella crusts, this species does not produce rhizomorphs or cordons and has a very thin, inconspicuous configuration. It lacks cystidia, has thin hyphae with clamps, and produces subglobose to broadly ellipsoid ornamented spores. Between the macroscopic colors and construction of the basidoma, size of basidiospores, and combination of other microscopic traits, it is distinct from any currently described Xenasmatella species, as far as I can tell. The combined ITS and LSU phylogenetic tree indicate that is part of a diverse (based on ITS percent similarity) but unnamed clade that has been documented as environmental sequences from North America, South America, Europe, and Asia.

Ecology: On the bottom of well decayed wood, presumably growing saprotrophically, although its similarity to environmental sequences from root tips suggests a potential to form ectomycorrhizae.

Basidioma: Fresh basidioma cream and greyish blue in color, thin (up to 150 µm in thickness) with a farinaceous to chalky consistency and smooth to punctate or granulose configuration; dried basidioma tannish and inconspicuous; no rhizomorphs or codons present.

Chemical reactions: Not evaluated on fresh basidioma, but 5% KOH reacts black on the dried basidioma (similar to the wood substrate, but the latter returns to its original color upon drying whereas the hymenium retains its darkened color). 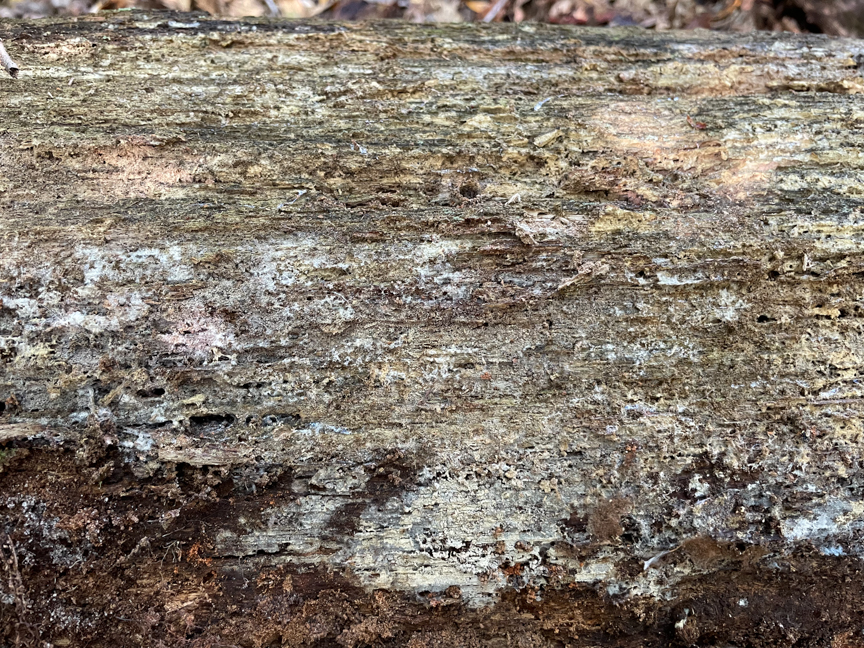 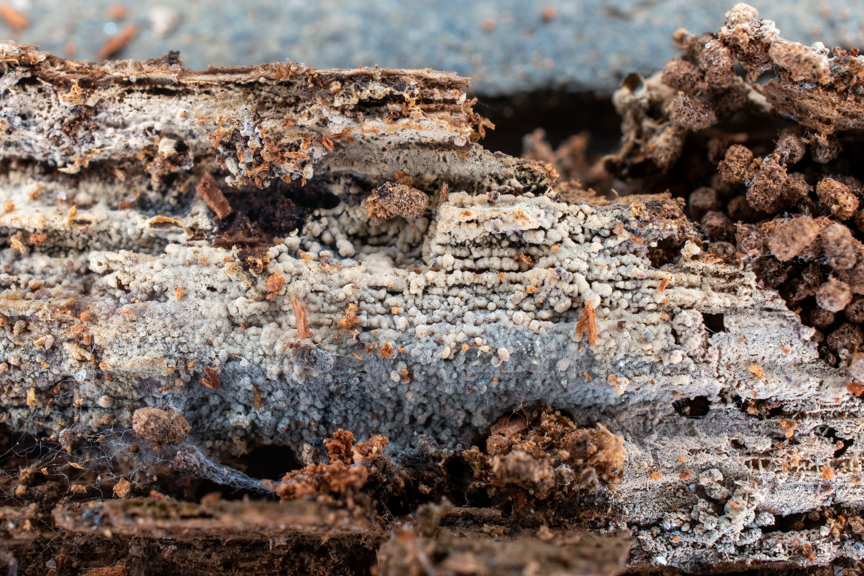 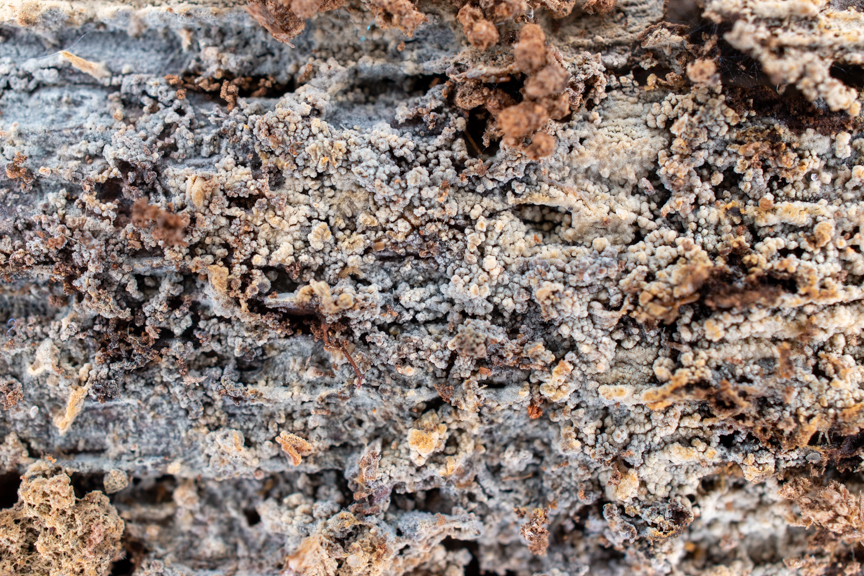 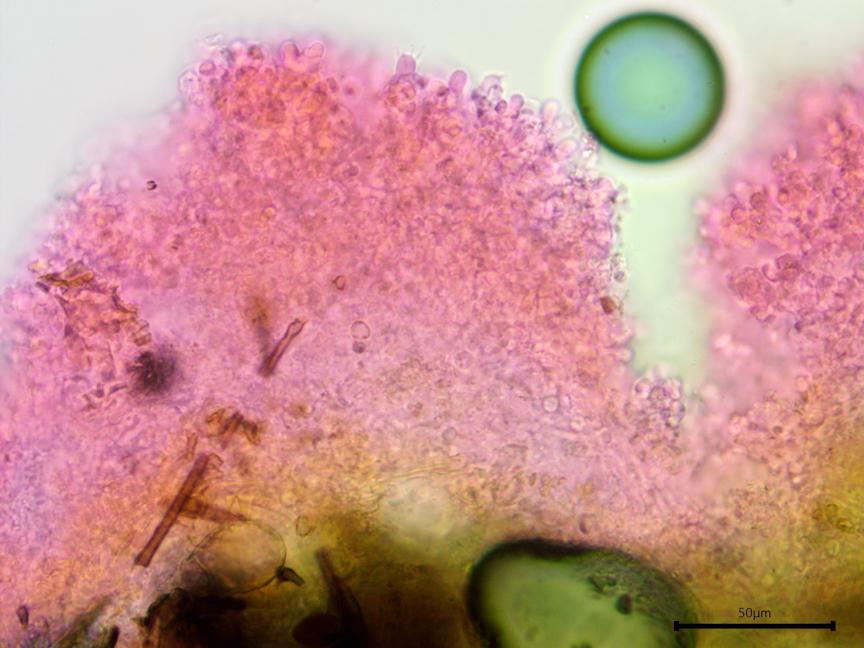 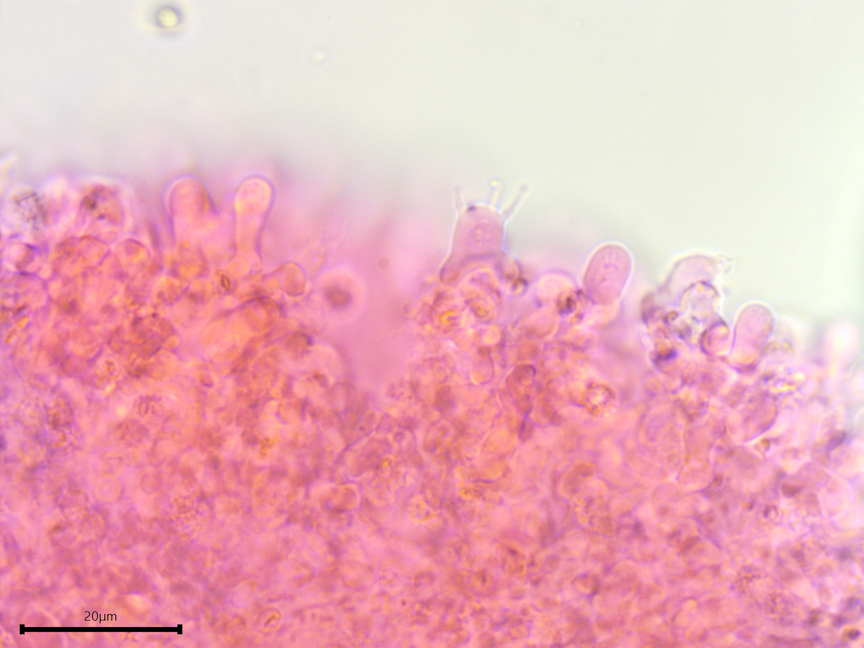 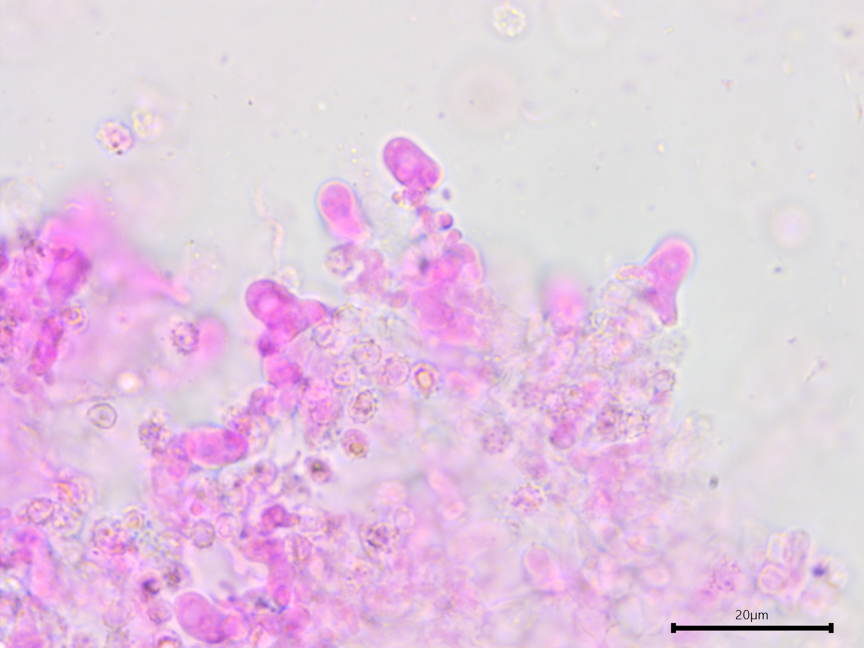 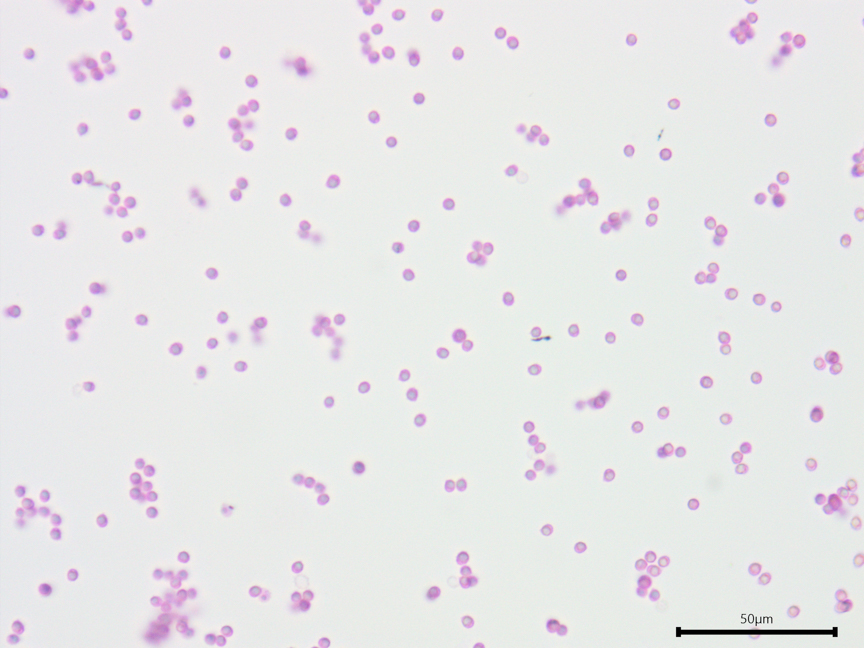 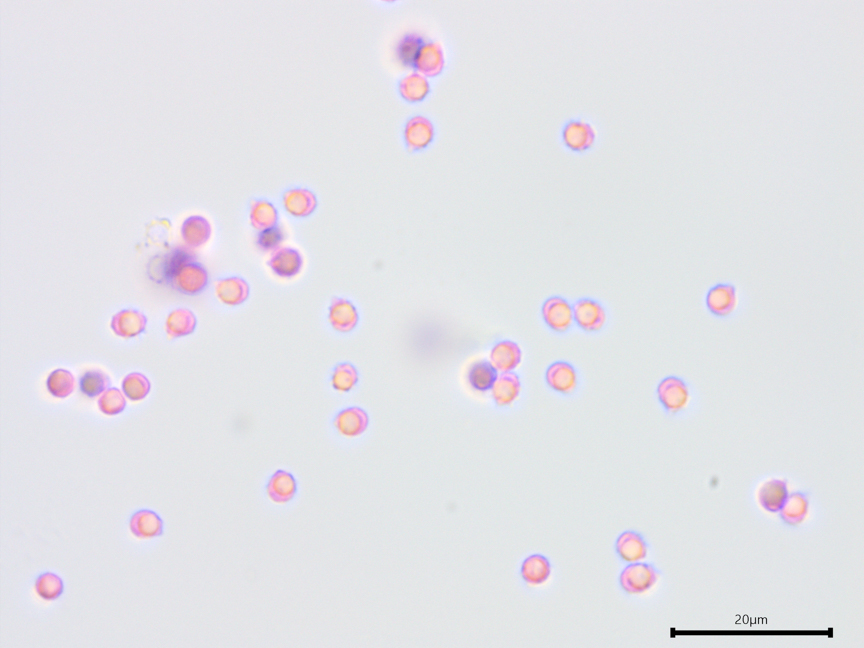 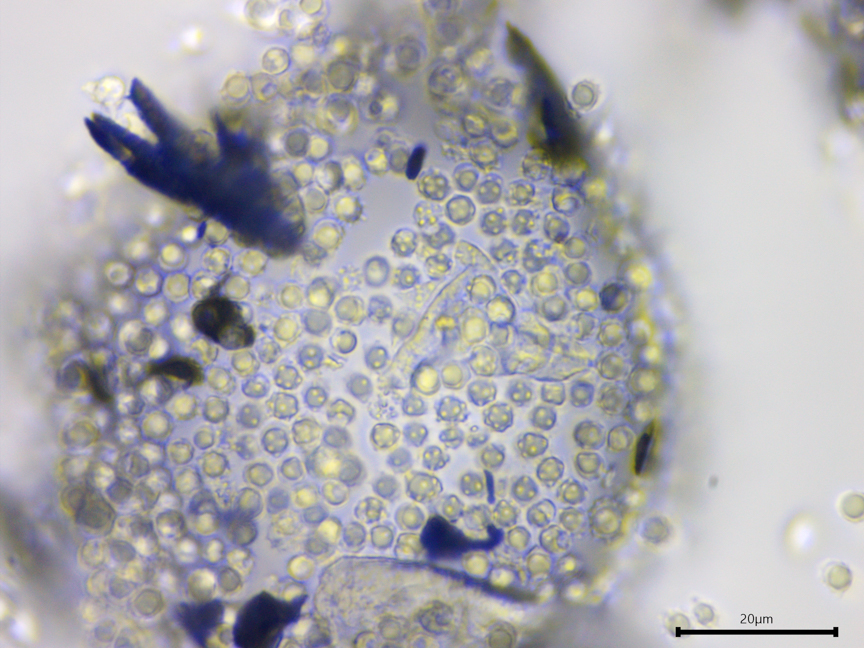 For some reason the spines on spores were easier to see when they were trapped in an air bubble. 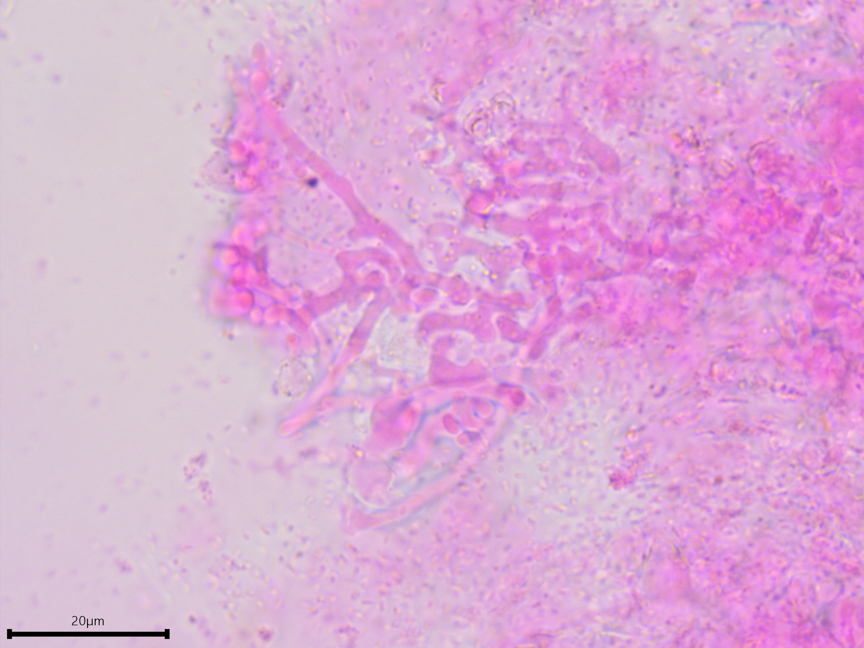 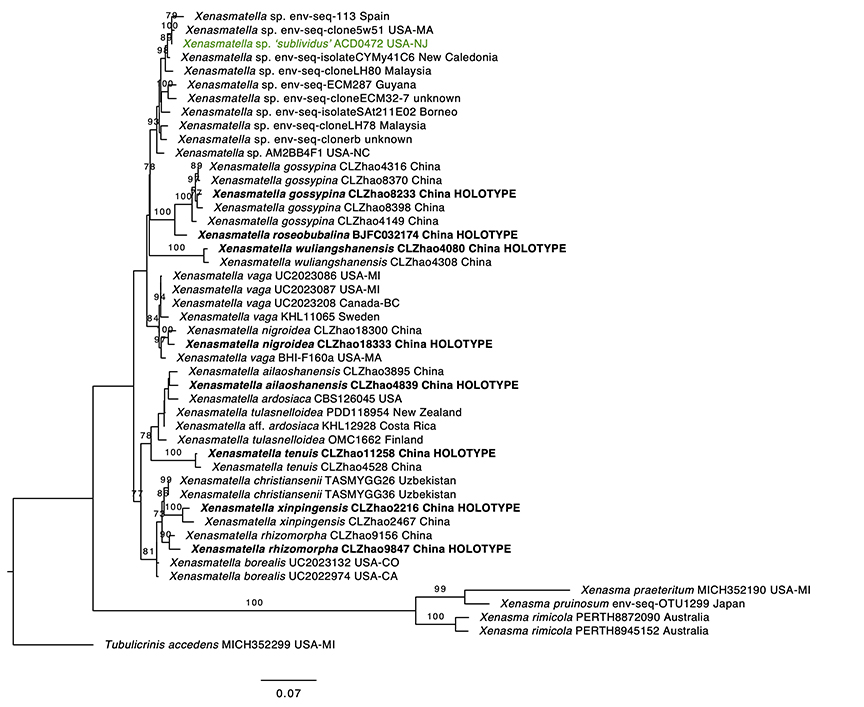