The genus Vararia, which contains about 60 species, is common in the subtropics and tropics but less diverse in temperate areas (Karasiński 2010). Of the temperate species, Vararia investiens seems to be the most widespread and frequently encountered. As far as crusts go, it is actually really well documented with 967 records in MyCoPortal (accessed December 5, 2020). I personally observed this species many times before finally collecting one for study. It appears to be prevalent on the underside of small deciduous branches and sticks, recognizable by its distinct yellow color and velutinous aspect. Any doubts about ID are quickly dispelled with microscopy — the stunning dichohyphidia and prominently pointed ellipsoid-fusoid basidiospores are quite unique.

Vararia basidiomata have an interesting development whereby the basidia and cystidia originate deep within a blanketing hyphidial hymenium and elongate through it, but are constantly overgrown by expanding hyphal elements. As a result, basidia and basidiospores are found embedded within the basidiocarp at all levels and are difficult to discern among the jungle of needley dichohyphae (Lentz & McKay 1965).

Ecology: Saprotroph on the underside of hardwood sticks, common and cosmopolitan.

Basidiocarp: Effused, straw yellow to golden in color, even to tuberculate, membranaceous to chalky-crustaceous (reminiscent of felt, in my opinion), growing over and agglutinating small debris to the substrate, margin abrupt.

Hyphal system: Dimitic; generative hyphae with difficult-to-discern clamp connections, embedded deep within a thicket of acicular (needle-like) dichohyphae or dichohyphidia; dichohyphae thick-walled, weakly dextrinoid, yellowish in KOH, profusely branched, extending from the substrate to the hymenium and beyond, seemingly constituting the entire subiculum, width (1.9) 1.9–2.8 (3.2) µm (n = 10); I observed a few enormous and thick-walled seta-like dichohyphida with one or more central hyphae running the interior length, a characteristic mentioned briefly by Lentz and McKay (1965).

Notes: All measurements taken in 5% KOH stained with phloxine B. The basidiospores are a bit wider than what is reported for this species by Bernicchia and Gorjón (2010), but more consistent with the width reported by Karasiński (2010). According to the latter study, the pip-shaped spores with their prominent "suprahilar" extension is distinct among Vararia in temperate areas (but not the tropics or subtropics), making northern specimens of this species easily identifiable with microscopy. 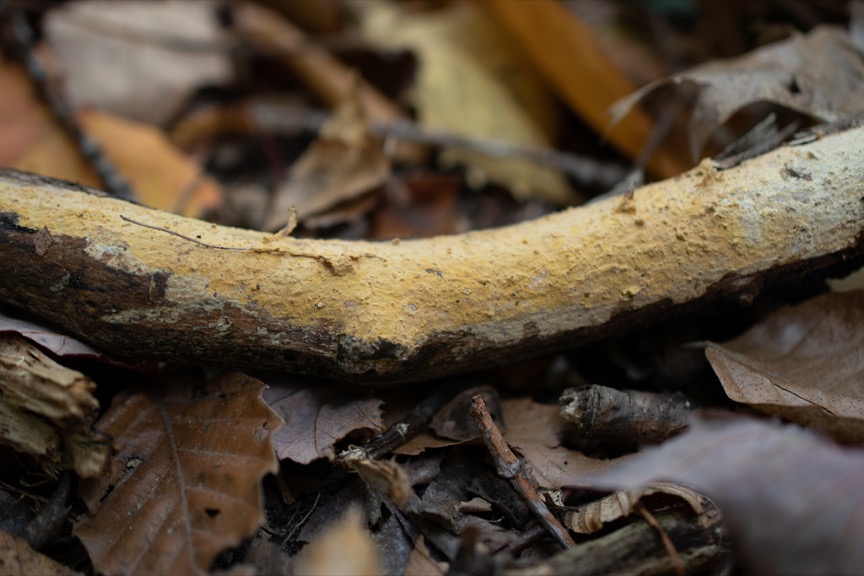 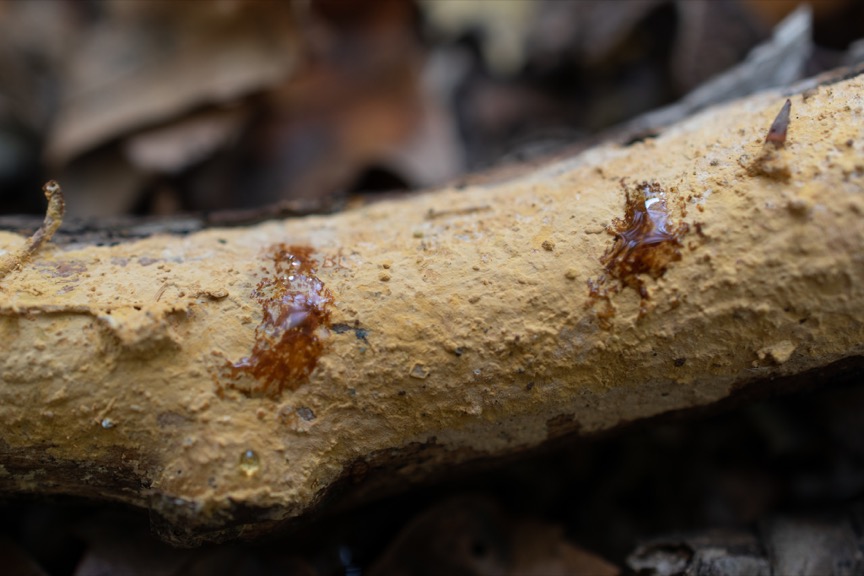 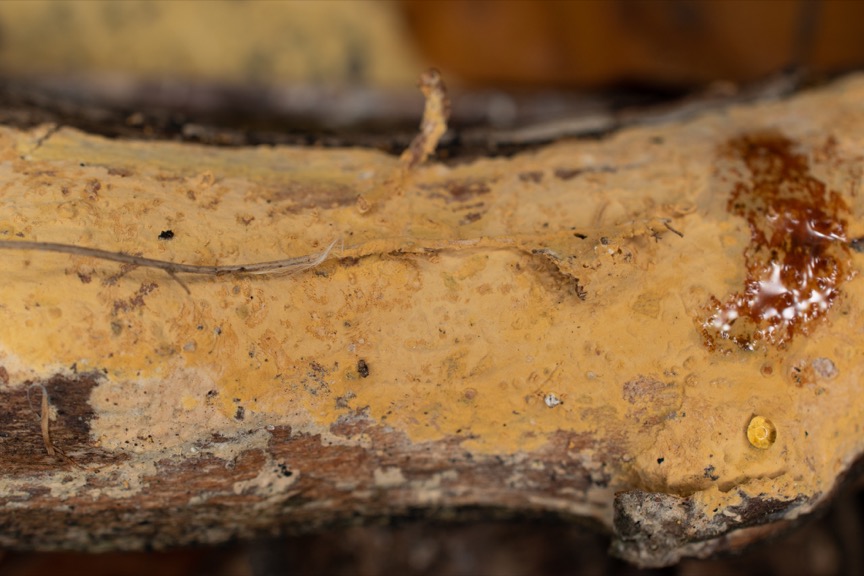 Close up, the texture is even with scattered warts. The fungus has grown over debris and small twigs, incorporating them into the basidiocarp. 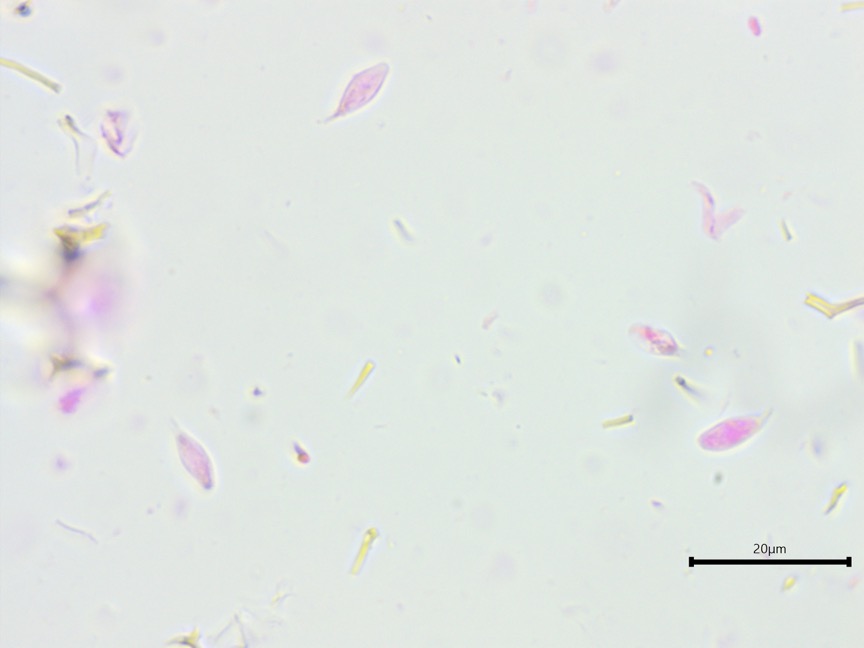 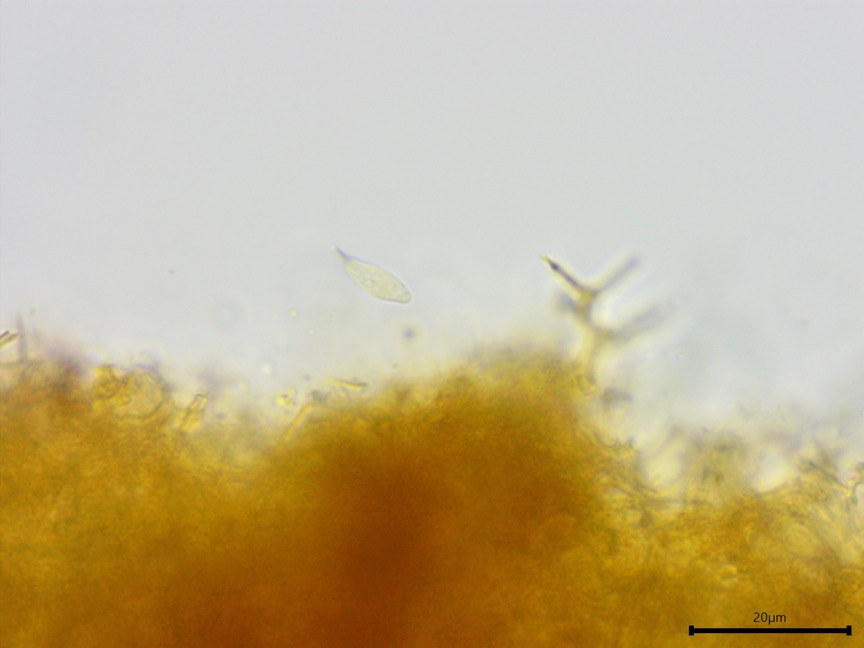 The extension on the spore tip is amyloid. 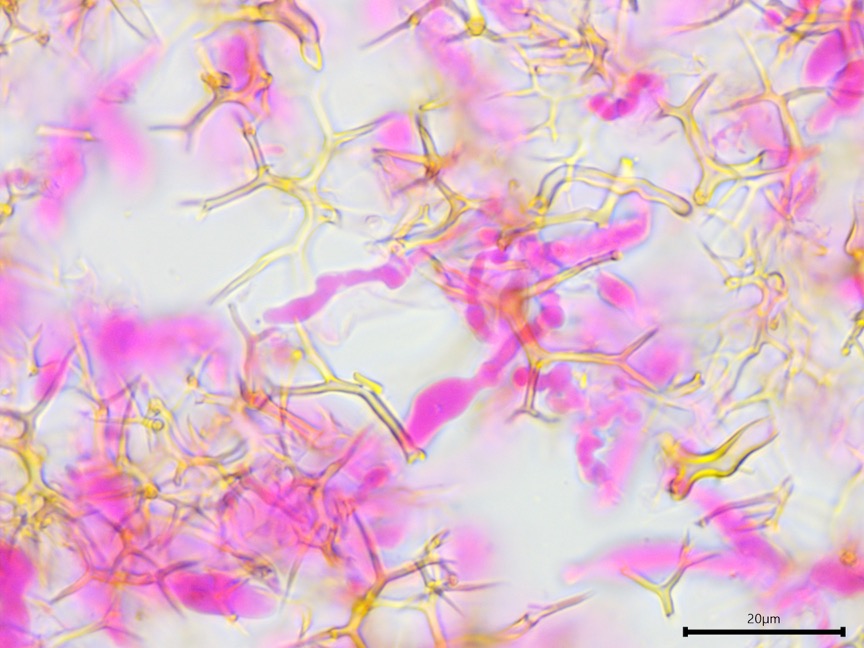 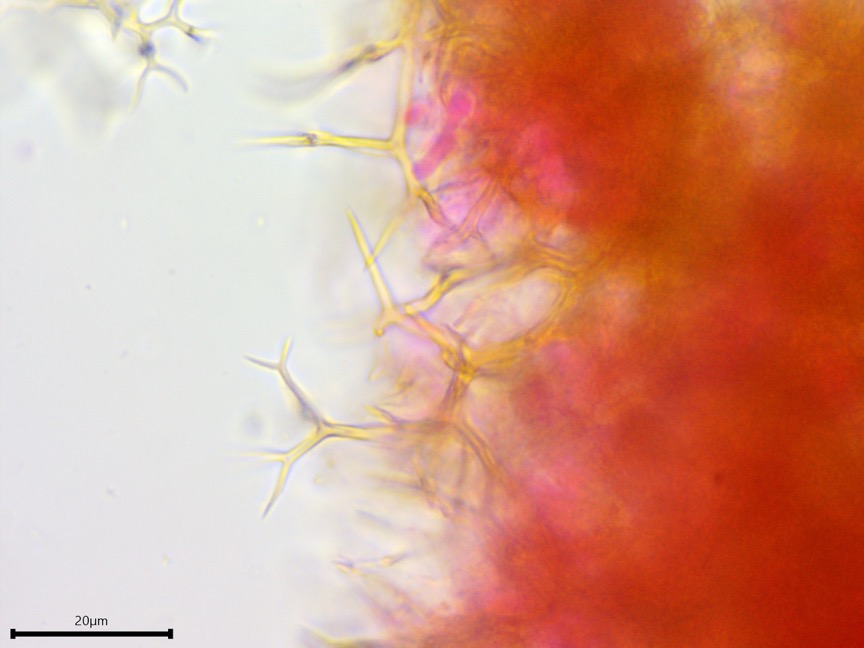 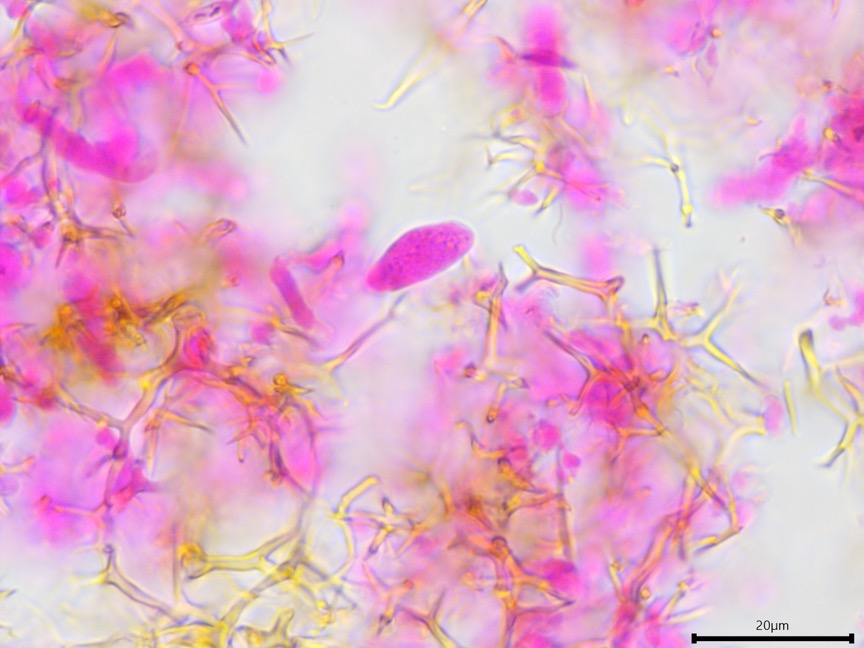 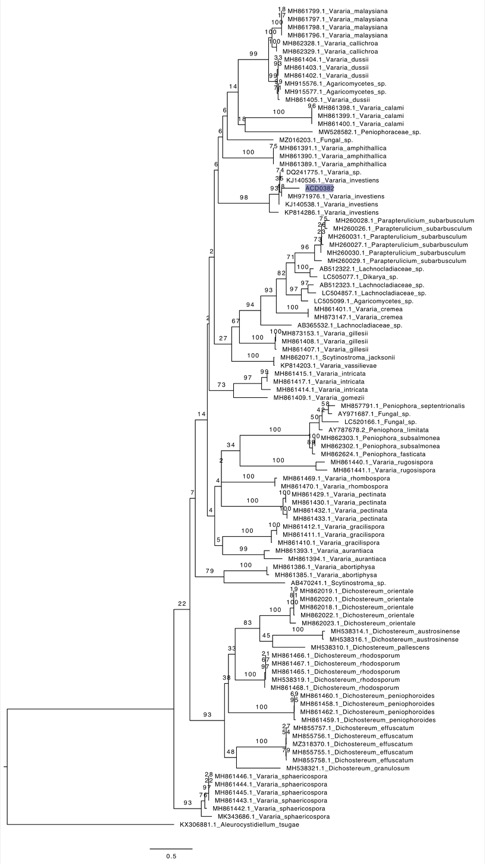 Phylogenetic tree of ITS rDNA sequences from the studied specimen (highlighted) and selected vouchered specimens on GenBank. The sequences were processed with ITSx to remove the flanking SSU and LSU partial sequences, aligned in SeaView with MUSCLE, and made into a tree with RAxML using 100 bootsrap replicates and the GTRGAMMA substitution model. Aleurocystidiellum tsugae serves as the outgroup.