Tomentella is a large genus of mycorrhizal crusts that has received relatively little taxonomic attention. In fact, general crust references typically ignore this group. Michael J. Larsen (1938–2000) was the pioneering North America Tomentella taxonomist whose 1974 Mycologia Memoir remains the best reference available, to my knowledge (Ginns 2004). While species-level identification is challenging, Tomentella crusts can often be quickly identified by their distinct ornamented spores.

Tomentella ferruginea has very cool spiky lobed spores and cyanescent basidia (basidia that turn dark green, blue green, or green black in KOH). It can be separated from potential lookalikes (at least in terms of microscopic traits) such as Tomentella botryoides by the presence of thin skeletal hyphae in the cordons. However, this trait is not very noticeable, in my opinion. I only "found" the skeletal hyphae after searching for them because I was convinced that Tomentella ferruginea was a perfect match in all other regards.

Ecology: Mycorrhizal (Wang & Guo 2010), found on the bottom of logs in hardwood and coniferous forests (Larsen 1974).

Basidioma: Effused; hymenophore grandinoid to colliculose, hypochnoid, thin and separable (at least upon drying); hymenial surface olive green when fresh, drying dark green brown; margin indistinct, arachnoid to fibrillose or hypochnoid, yellow brown (concolorous with the subiculum); basidioma subtended by cordons of varying thickness and toughness, which also extend out from the margin.

Notes: Basidiospores were measured in Melzer's reagent; all other structures were measured in 5% KOH. Photos of this species typically show a brown or even greyish to blackish brown hymenial surface with only occassional slightly olive hues, which may actually represent Tomentella botryoides. Species descriptions of Tomentella ferruginea (e.g., Larsen 1974, Jülich & Stalpers 1980) consistently list green, bright green, and olive green as valid colors, so don't be fooled by the general lack of green representatives on the internet.

Larsen, M. J. (1974). A Contribution to the Taxonomy of the Genus Tomentella. The New York Botanical Garden. 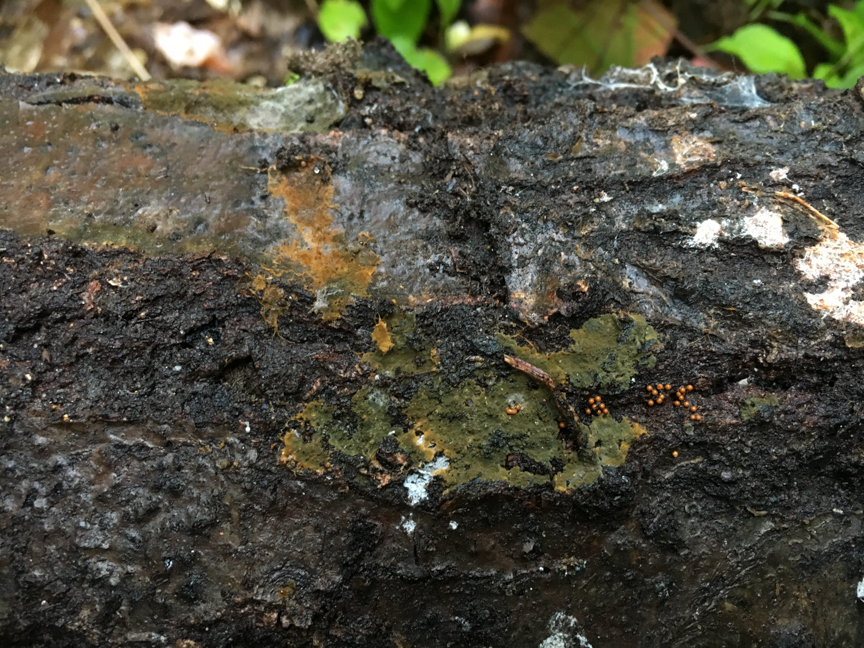 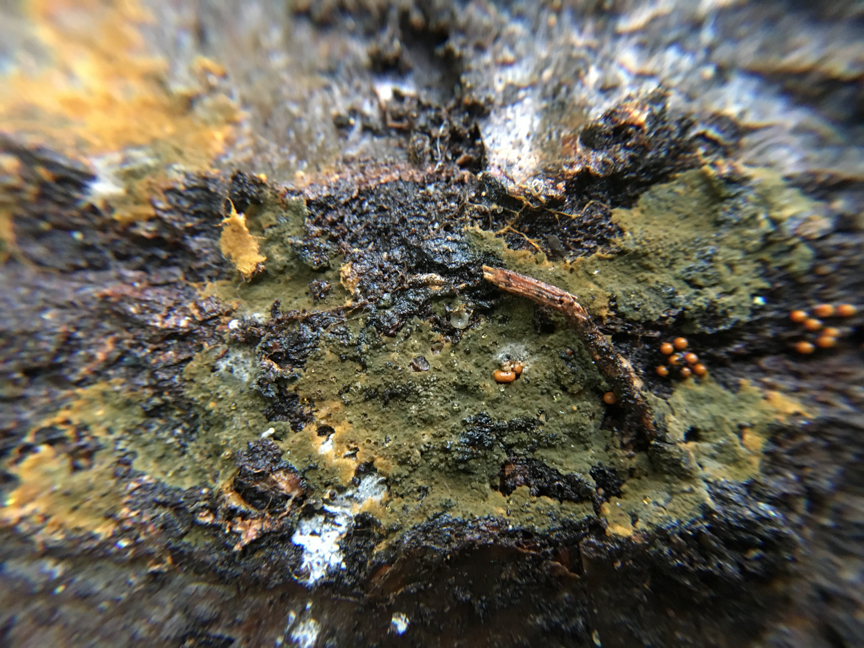 A closer look at the basidioma showing cordons extending from the margin. 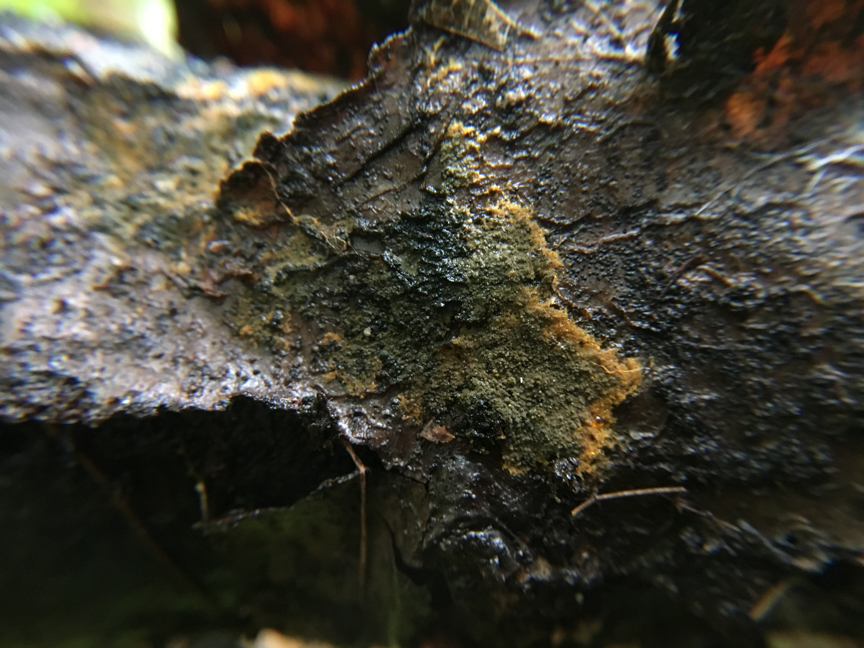 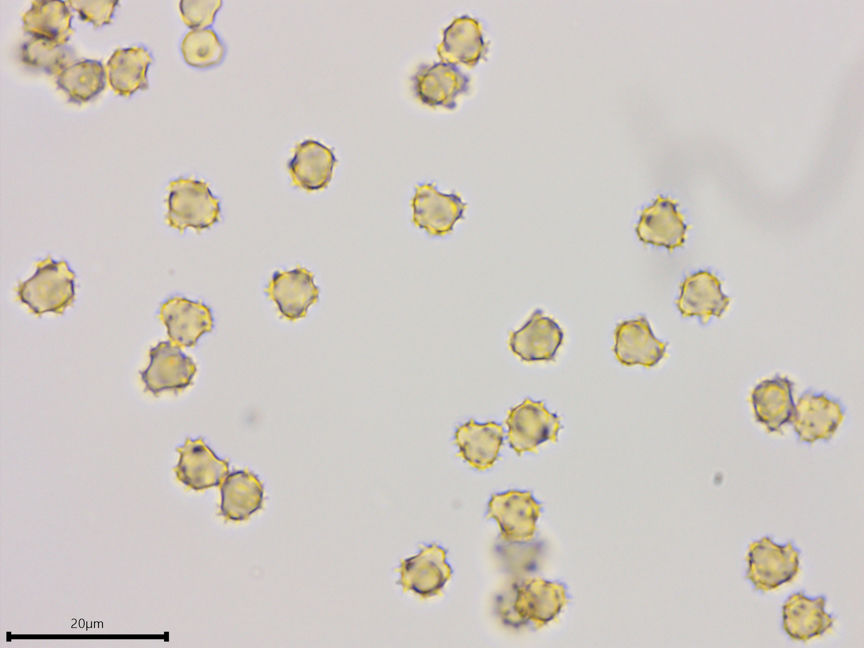 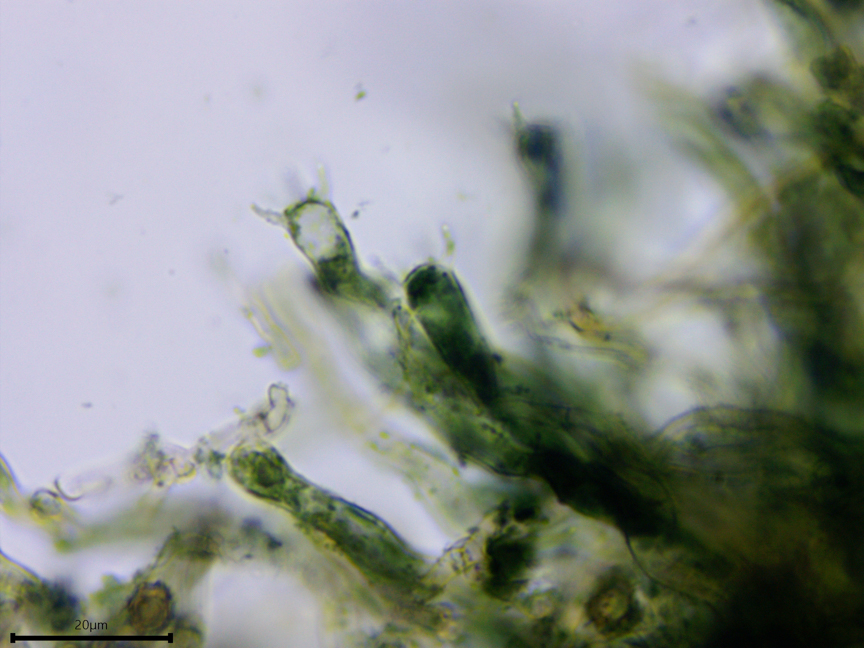 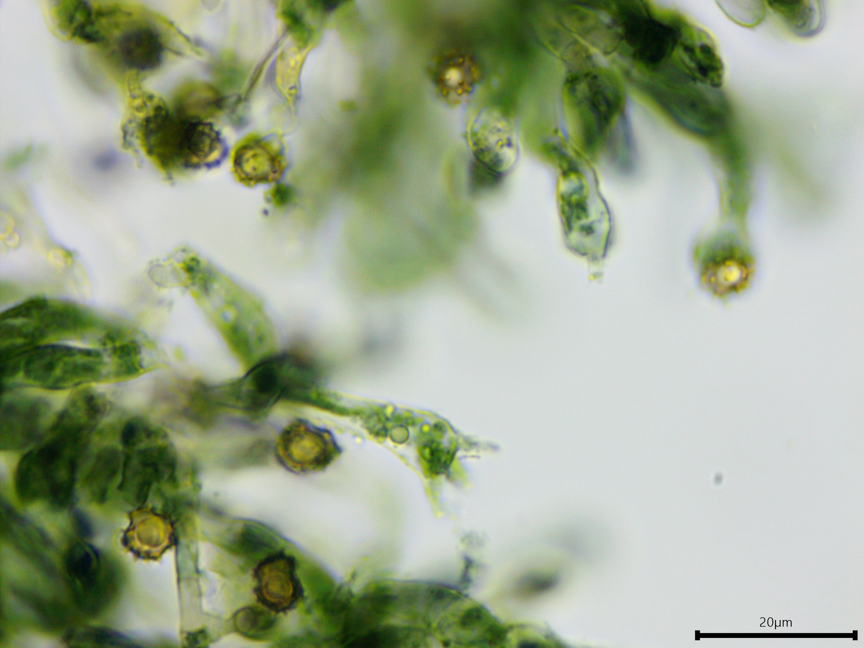 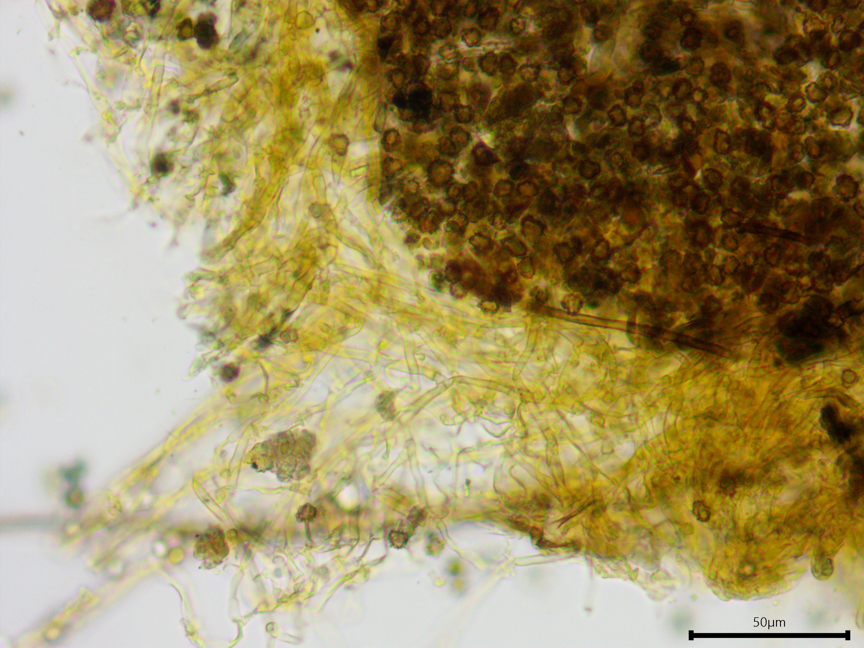 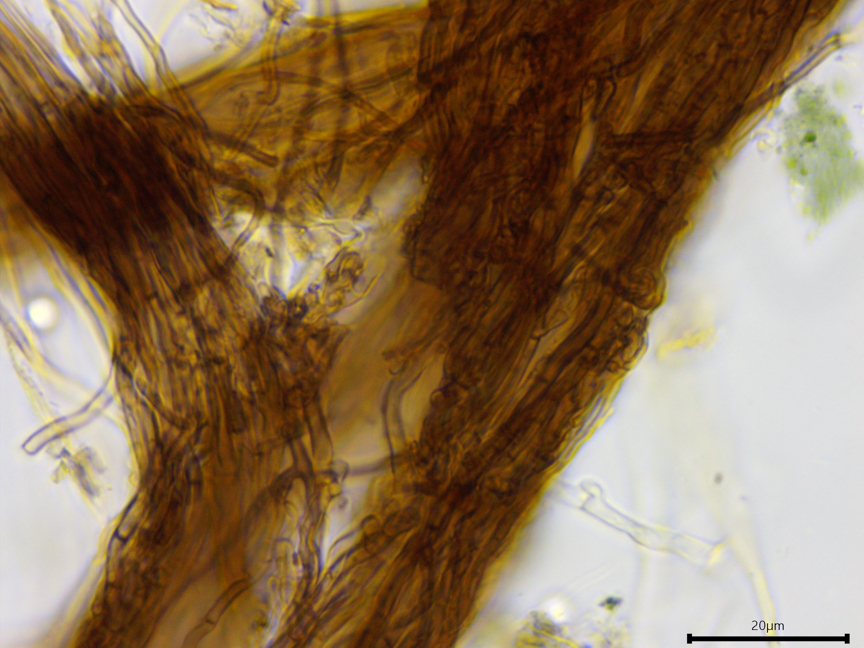 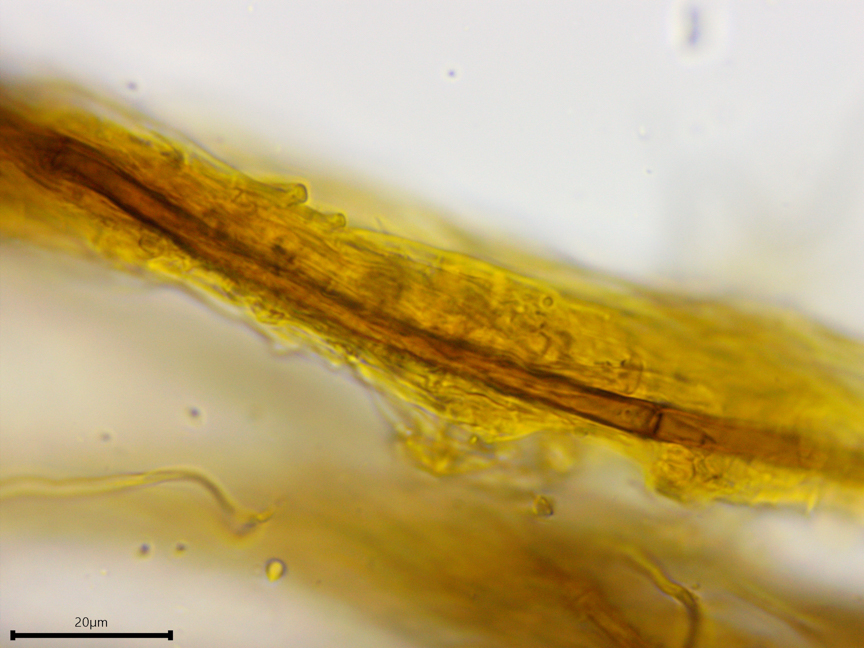 Large, darker brown, thicker-walled hypha running through the core of a cordon. 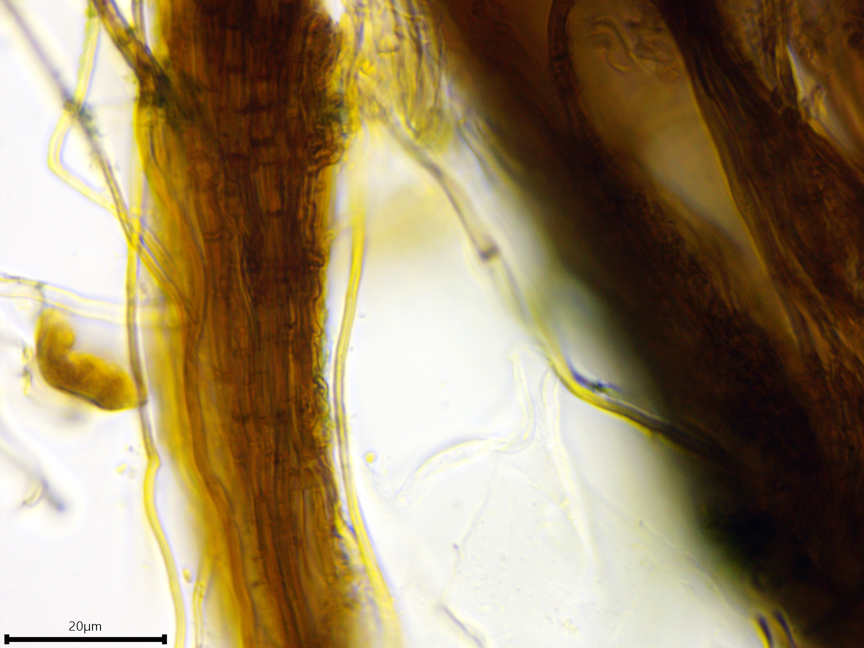 Narrow skeletal hyphae on the outside of a cordon.