Belonging to the family Corticiaceae, Galzinia incrustans is a "true" crust fungus. It appears to be fairly common in Northeastern North America with over 30 collections represented in MyCoPortal. In Scandinavia, researchers have found that prescribed burns are important for maintaining wood-rotting fungal species diversity, including populations of Galzinia incrustans. A few years after a fire event, Galzinia incrustans is prevalent on charred wood (Olsson & Jonsson 2010).

Bernicchia and Gorjón (2010) state that Galzinia incrustans grows on various shrubs. This specimen, however, was growing on another fungus — a conk. It is unclear whether the crust was using the polypore as a perch to better disperse its spores or if it was actually digesting the polypore for nutrition. This specimen differs in other subtle ways from the description of Italian collections, most notably in the color of the basidiocarp. The one documented here is peachy salmon whereas Italian specimens are reported as greyish. Apparently, Galzinia species are commonly found on very rotten dead wood in wet conditions (Langer and Langer 2019), but the prevalence of Galzinia incrustans on charred wood in Scandinavia, its reported occurence on shrubs, and this specimen's growth on an exposed polypore surface suggest that Galzinia incrustans is a bit more dessication tolerant than others in the genus.

The ITS rDNA phylogenetic tree places Galzinia incrustans as sister to two taxa in the Gloeophyllales order, Gloeophyllum carbonarium and Neolentinus dactyloides, but with little support. A multi-gene or whole-genome phylogeny will be necessary to resolve the evolutionary history of Galzinia incrustans, which was sequenced in Larsson's 2007 reclassification of crusts but was not included in the molecular analysis (Langer and Langer 2019).

Ecology: The described specimen was found on the first day of spring on March 21, 2017 on the undersurface of a conk.

Notes: Cyanophily was difficult to determine. The cytoplasm stained blue, but it is hard to tell whether the staining was sufficient to call this cyanophilous. All measurements were taken using a smash mount of dried tissue in 5% KOH stained with phloxine. 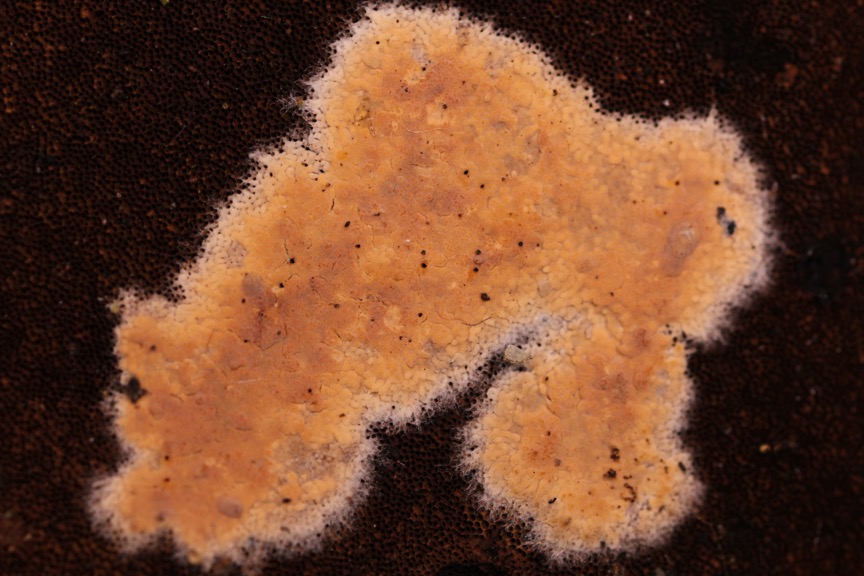 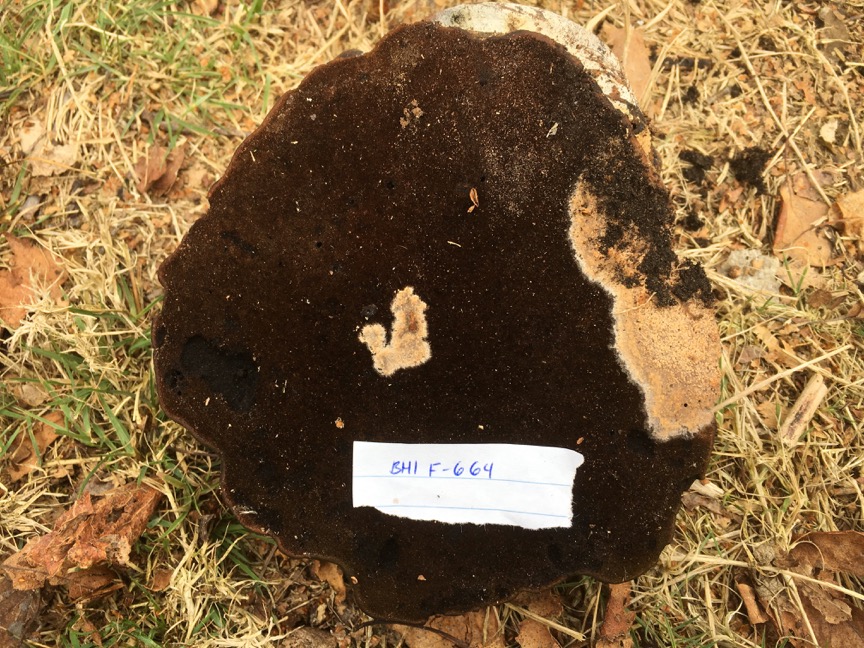 The fungus was growing on the pore surface of a polypore. 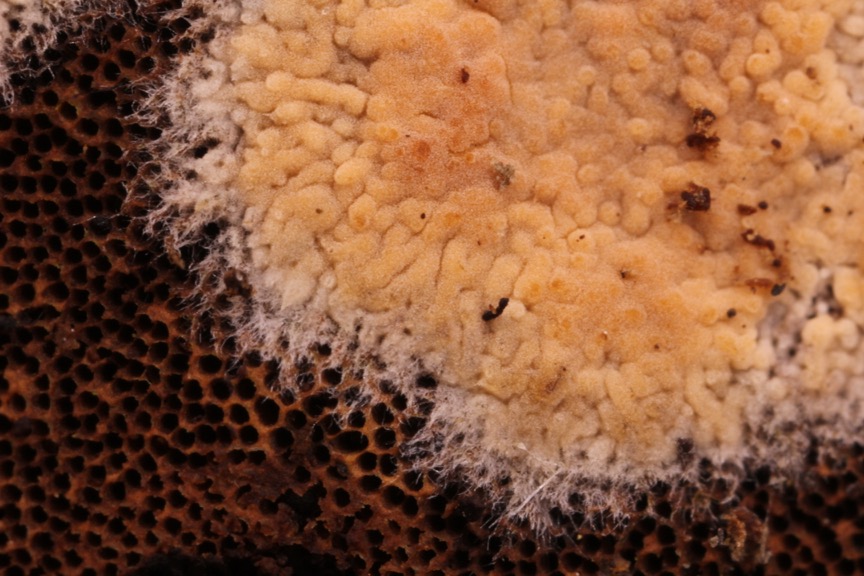 Note the spreading white margin of Galzinia incrustans and the bumpy texture. 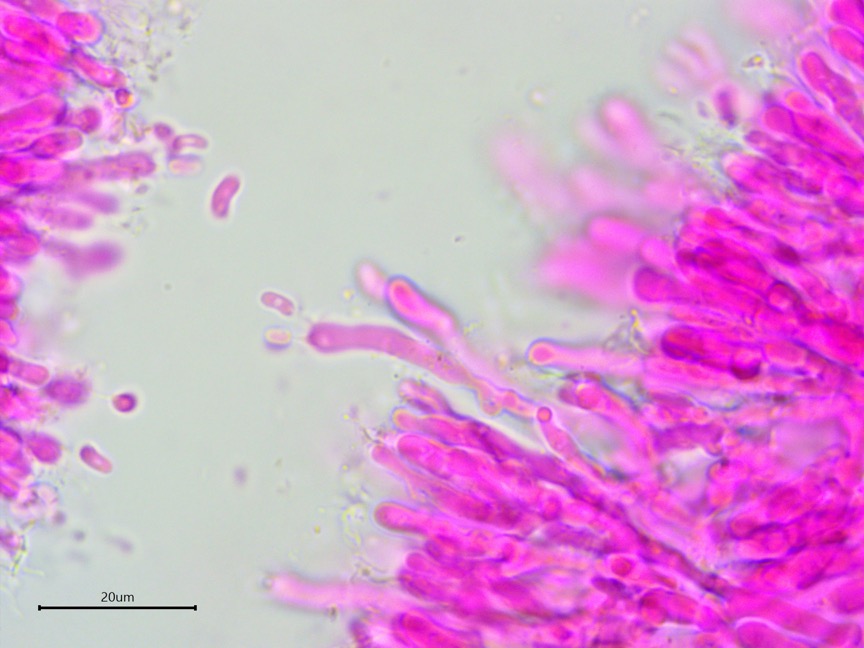 The basidia have a basal clamp and are variable in shape; some seem to be pedunculate, or stalked. 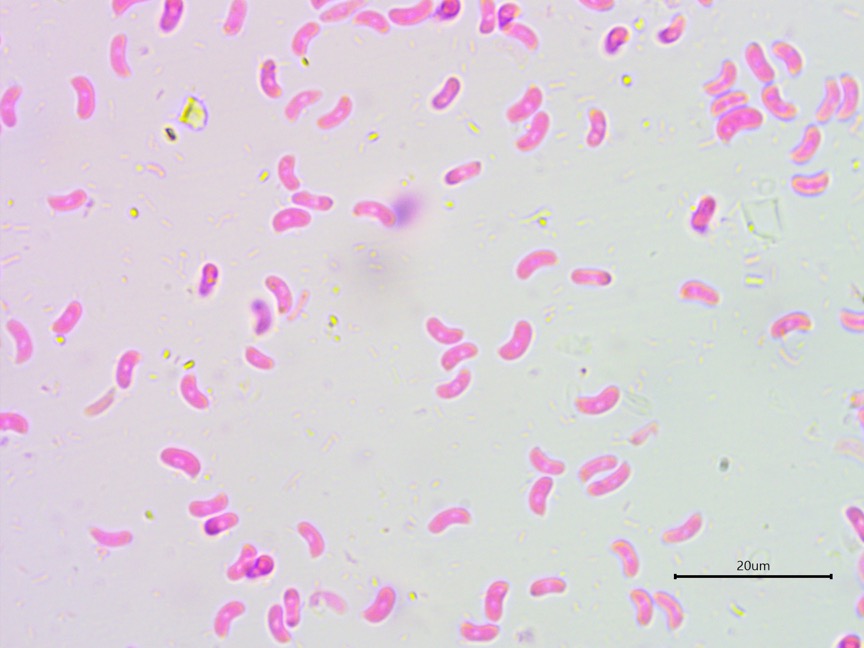 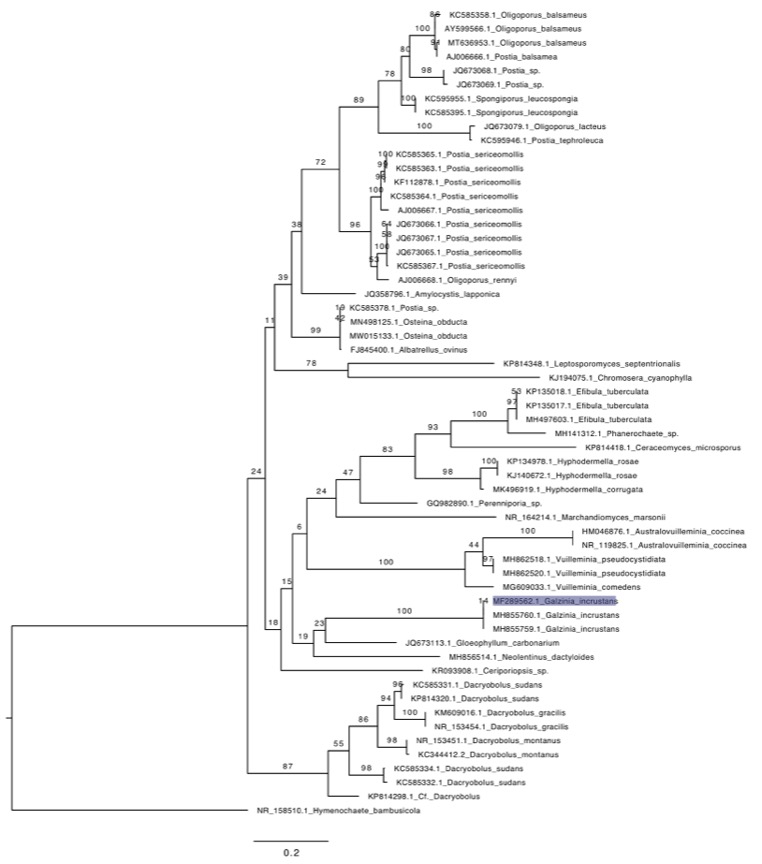 Phylogenetic tree of ITS rDNA sequences from the studied specimen (highlighted) and selected vouchered specimens on GenBank. The sequences were processed with ITSx to remove the flanking SSU and LSU partial sequences, aligned in SeaView with MUSCLE, and made into a tree with RAxML using 100 bootsrap replicates and the GTRGAMMA substitution model. Hymenochaete bambusicola (Hymenochaetales) serves as the outgroup.